So for anyone who hasn’t heard the news, there was an incident last night. The Lakers played the Warriors and needed the win. Like the past several games, Kobe played every possible minute. For better or worse, this agenda was working: The Lakers started the night 1/2 game ahead of Utah for the 8th and final Playoff spot. When the Jazz won earlier in the evening, it was a foregone conclusion that the Lakers NEEDED TO WIN. To that end, Kobe did his typical thing. Which is to say, he played harder than any other human could. And with under 2 minutes left, the game tied, Kobe, after already hitting the last  few shots for the Lakers (one of them an improbable shot from several feet behind the 3-point line), Kobe made his move – a dribble-drive from the top of the key toward the basket. A move, as Kobe would say, he’d made “a million times before”. Only this time, he crumpled to the floor massaging his ankle.

If there’s an Achilles’ Heel to Kobe Bryant, it’s that in the end, he’s a man like any other. It’s not outwardly apparent because the guy plays through so many horrible injuries, it seems nothing can keep him off the court. I’ve grown up with this guy, admiring that part of his game above all others. He wins at all cost, with no regard for his body.

Obviously that takes a ridiculous amount of focus and training just to get to that point. And his work ethic is the stuff of legend. I’ve never seen anyone else motivate themselves like Kobe is able to, even after all these years. It certainly would be perfectly understandable if he wasn’t as focused as he was earlier in his career; But the truth is, he has been able to stave off Father Time in a way that made it seem just hours ago he’d be able to keep this up for another 5 years, possibly achieving the unbelievable – the NBA’s all-time scoring record. Basically, he needed to go another 5 years at 20 points per game. Who knows if this would have been possible? What is crazy is that it was even conceivable. I’d go into why, but that’s not what this post is about.

The point is, he made that move toward the hoop, crumpled down to the floor, got back up, walked around a little bit, then – get this – he went to the free throw line and calmly sank the 2 free throws that would give the Lakers the much-needed victory. And he did all this on what we later learned was a torn Achilles tendon. A “complete tear” is what they called it. 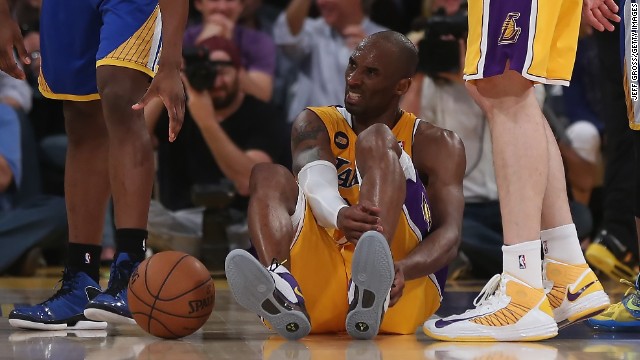 Can anyone else have done that? Because it’s Kobe, we all half expected him to play on one foot. Reality, however, had to sink in on some level as we realized the guy was human after all. A very rare human, but nonetheless….

I’m awfully bummed this happened. I KNEW if the Lakers could even MAKE the playoffs, they’d have become a very good team. Because they lost so much at the beginning of the season, they needed to win 3/4 of their games just to eek their way into the post season… And riding Kobe extraordinary talent and tireless mental fortitude  that’s exactly what they’ve done. The guy has refused to let them lose. Defense, endurance, crazy shot making, and unrelenting willpower have been his weapons of choice. I can’t think of any other player I’ve ever seem demonstrate that combination of talent so successfully against so many odds. And I’ve been around for Magic, Jordan, Shaq, Garnett… Some really good players.

He’ll be back. And probably sooner than anyone expects. But that’s 6 mos – a year away no matter what, just because biology demands the tendon has time to heal. I have to say, awful as this all is, there’s only one man in the world that seemed indestructible to me. And its somehow appropriate that this injury revealed Kobe’s only Achilles Heel. Only after he returns to prove he can go out on his own terms will he take his place on Olympus, with the rest of the immortals.