Went to see Thor: Ragnarok last week. Man was that fun. There’s something going on with the superhero genre, if that’s actually a “thing.”  The last Thor movie, The Dark World, was a little bit derivative. It gets a bad rap, but not because it’s a bad movie. Just that there’s a formula and we had seen it a few times already. Since then, Marvel and Fox in particular, have been experimenting with the style of the films. Captain America: The Winter Soldier was a spy thriller.  X-Men First Class was a period piece, Deadpool and Logan were both envelope pushers. They’re making movies in certain genres that are populated with comic book characters. This is why I wonder is “comic book” is a genre at all. 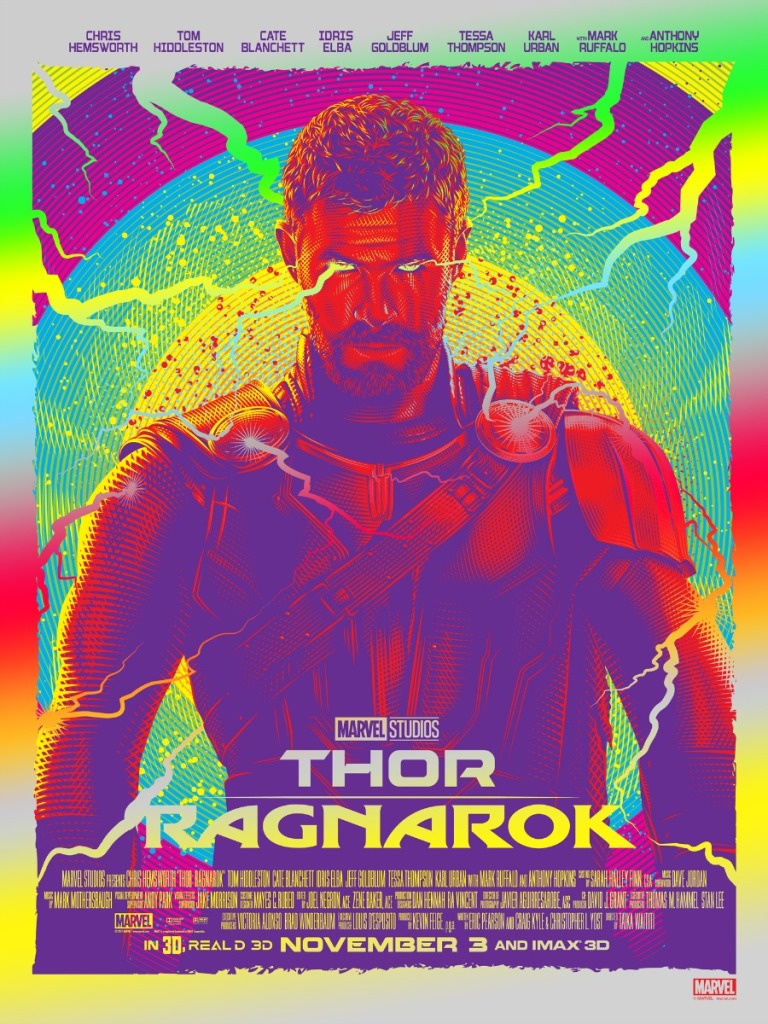 Either way, Thor: Ragnarok was something new and different; wildly different from the previous installments in the Thor series. Obviously, the comedy was paramount, tossed in with a pinch of Guardians of the Galaxy. The result is one of the most refreshing, fun and exciting Marvel entries yet.

How can they keep redefining themselves with every single movie?!? I was talking to a friend after we saw Thor and we both agreed this was one of their best movies. Not only that, but Marvel movies seem to get better and better with each new release. When is the last time there’s been a bad Marvel movie? Could have been Ant-Man. I mean… Ant-Man. That movie had no business being as good as it was. Dr. Strange? Nope. Despite being a bit of a throwback to Phase 1 origin stories, the visual elements and the introduction of magic were enough to separate it from the pack. Age of Ultron may have been the last time a Marvel movie wasn’t refreshing and new. It was just after that when the new releases seemed to each have an angle; something to rest on that made them different. And Ultron wasn’t even a bad movie!! Like Thor: The Dark World, the only real issue with it was it felt a little like walking down a well-tread path.

Can you remember a time – a very recent time – when each movie had one special person with abilities? That’s the old way. Now, after Avengers, there’s some legit question as to why nobody else would show up if there were a world-altering event. Iron Man 3 exposed that flaw. Dr. Strange was able to avoid that pitfall because nobody else in the MCU was a magic user. But now? I can’t even really see Dr. Strange 2 happening without at least Scarlett Witch showing up.

None of this is what I’m thinking about though. I’m concerned. The reason is because Justice League is right around the corner.
This is a movie I’ve been waiting my entire life to see. Was it fun seeing Avengers? Yes. Has it been great seeing C and D-list characters thrive? Sure.
But now, we have lesser characters like Ant-Man, Dr. Strange and yes, even Thor, all enjoying a cultural moment while Batman, Wonder Woman, The Flash and Superman are loaded into the back seat of the comic book movie car.
If it were 2011 or 2012, a straight up world threat leading to a team up of superheroes would be novel. And that’s what we got in 2012. But it’s been several years and as discussed, the dynamic has evolved.
It’s no longer enough to have a couple characters in the same movie. My larger worry is that DC seems to have abandoned the thing that separated them: the tone, the color palette, and the deconstruction of what it means to be a hero in today’s world. I really have enjoyed that aspect of those movies. I’m the one who really loves Man of Steel and BvS. Everyone loved Wonder Woman. But that had a “thing”: the 1st female-led superhero movie.
All I’m saying is I’m really hopeful Justice League is good. Not just good, GREAT. Based on trailers and clips, it looks good. However, instead of continuing down their own path, they’ve clearly diverged from the serious tone and integrated some light-hearted banter. I love the Marvel movies, but that’s not what I want to see when I watch Justice League.
It’s a bummer that MoS and BvS were so divisive. I still don’t quite know why. I’ve written about it endlessly in past posts. Mostly it seems like people have an expectation of who these heroes are and if they’re anything but that narrow vision in the movie, people complain. Which is unfortunate.
Hopefully I’m wrong and Steppenwolf’s CGI looks better on the big screen. Hopefully there are still stakes and consequences. Hopefully DC can be what it should be: the world’s best, most famous superheroes saving the world. And not just an Avengers knock off. Hopefully Thor: Ragnarok isn’t the best superhero movie in theaters this holiday season. At this point, that’s a tall order. We’ll know more in a week!!