Saw A Good Day To Die Hard last night for Valentine’s Day, and the question has to be asked.. Have I lived long enough to see things come full-circle in the action movie genre? 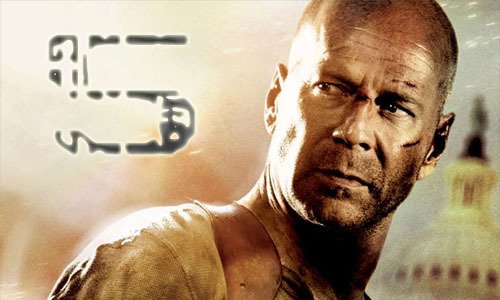 A Good Day to Die Hard

Most people… that is, most reviewers…will tell you this is a TERRIBLE movie. I’m sure they’ll hate the story (non-existent), the characters (lack of), the action (ridiculous) and will discuss the noise (plenty of it), the incoherent plot (is this a rescue? A family reunion? Was it all a CIA plan?), and the lack of any clear connection to ANYTHING resembling the previous Die Hard movies, save for the lead character.

But I’m here to tell you this is an AWESOME movie. If you’re going in thinking, “WIllis made Looper – all his movies lately are good”, you clearly don’t remember Live Free or Die Hard, which actually looks like a masterpiece compared to this latest incarnation. That said, the truth about Die Hard 5 is two-fold:

1) It hasn’t been Die Hard since the 2nd movie, when is was McClain trapped somewhere, having to take out terrorists to save the day and his wife’s life. Die Hard With a Vengeance was only a Die Hard movie because it had John McClain in it. Otherwise, the entire plot device that made the   original a genre-buster was completely abandoned. Having only recently come to terms with that fact and learned to enjoy Die Hard 3, I’m now free to thoroughly enjoy anything left to come.

2) This is the FIFTH (5th!!) movie of the franchise. I mean, has there been another franchise that has 5 movies? And of those franchises, are all 5 of them watchable? Harry Potter was good. Completely different, and based on a book series, but I suppose that counts. Can you seriously tell me its fun to sit through those kids growing up again? If i’m to be honest, Potter 4, 6, and 7/8 are the only ones that I can stomach these days… And only if I’m bored. Star Trek’s original cast made 6.5 movies and 2, 4 and 6 are great. The others are either boring, bad or stupid (notice how Spock’s brother has never…ever, even once been mentioned again?) Even with Star Wars – the only other example I can think of – are there REALLY any good movies after Empire? Now ask yourself this: Can these Die Hard movies be watched again and again? As a marathon or individually? Can you come in on Die Harder and stop watching? The answers to those questions are “Yes”, “Yes”, and “HELL NO”

I believe A Good Day to Die Hard will fit nicely into a series that has become one of the ultimate morning traps: when I flip on cable on a Saturday morning, and see Mr. Takagi telling Gruber “You’re just going to have to shoot me”, I know I won’t be going anywhere until McClain meets Karl WInslow face-to-face and knows immediately who he is. If I want to check the news and hear, “You’re the wrong man in the wrong place at the wrong time”, I’m already mouthing, “Story of my life” before it comes out of McClain’s lips. And if I have the willpower, maybe I can get up and turn the tv back off before he decides to jump out of the chopper onto the wing of that plane. The movies clearly get more ridiculous from that point, and that’s one of the great things about a series which has been trending louder, faster, more, MOre, MORE from the very beginning. Building, Airport, City, Country  and now International. Next stop: WORLD.

If you’re reading this, you have already read reviews. You’ve already heard the bad things about this movie. My point is, drop your expectations, remember how awesome it is just to see McClain smirk in the face of certain death, and go enjoy a violent, throwback of an action movie. Like The Last Stand a month ago, gone is the PG-13 rating, and the bloodless killing. One of the best moments of the movie comes near the signature catch phrase, which, thankfully, has been restored to its glorious, expletive-ness. Friends, we’re in the middle of the old-guard action movie renaissance. I mentioned Arnold’s latest. Along with the Expendables movies, and now this… I’m just glad kids don’t have to grow up without bad, bloody, man-against-an-army movies they can remember fondly and reference for the rest of their lives. I’m not saying there is a Predator or Die Hard-type classic here, where it spins off into its own animal…But a Commando, Rambo III, Universal Soldier-esque memory is not out of the realm of possibility for newbies to this type of movie. And I LOVE that about A Good Day to Die Hard. In the end, after an hour and a half of explosions and witty comments all I can do is wait in suspense for the inevitable epic, In Space Nobody Can Hear You Die Hard. I can only hope I live so long.